“Ubisoft have delivered a solid and engaging amount of gameplay and a revelation in the spectacular Naval sequences.” 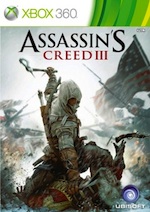 “Well – I was not expecting that.”  This seems to be the general consensus from rushing reviewers and eager gamers that have been desperate to swap Venetian parkour for tree running the the Frontier environs of the late 1800s.

The box, the previews and the media have spent the best part of 2012 building up ACIII as a game that takes the classic franchise into new territory and a new historical period. All good, except the world was not expecting a slow and sure build up to the narrative. With the game opening up on lead character Connor’s yet to be father and then developing Connor through his angst ridden teens you could be forgiven for having concerns. 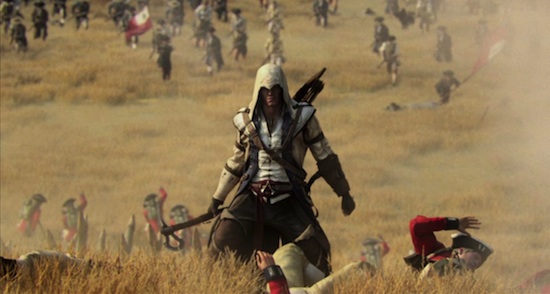 For the people that want a quick re-entry into the Animus and to be leaping from on-high onto unsuspecting victims this could be seen as a bad thing. For those that can accept the developers have tried something different and enjoy the ride, these set-up sequences can offer depth and investment in the narrative. At the point at which you relinquish control of connor’s father the story takes a turn, everything you had expected or possibly hoped for is taken away. The protagonist you have invested in becomes an antagonist and the men you have fought beside become your future targets. The web of Templar and Assassin intrigue is spun well across this New World and once you get hold of Connor it is time to start righting wrongs, some of which you may have actually put in motion yourself during your time as Nathan.

Ubisoft have developed an epic experience and not one that should be rushed, while the open world around may be deceptively smaller than you think it is teeming with life and historical activity. AC3 offers players plenty of opportunity to stretch their Assassin muscles, just not in the first third of the game and if you look back at the character development that is okay. There are plenty of attempts to bring new mechanics and activities into the world, mostly with success and lets not forget the original game in the series which was both groundbreaking and repetitive. 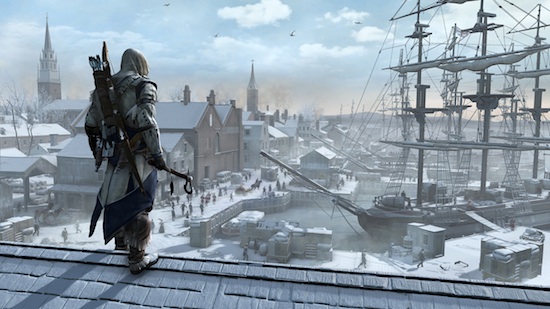 Take a stroll through the wooded forests of the Frontier and expect to see more wildlife than Snow White on a stroll, also expect to be chased down by a bear at some stage too. These encounters can be alleviated by taking to the trees and for free runners this is a smooth, fluid joy. Once you gather some confidence, stop leaping randomly off the tree and looking ahead, ground can be covered very quickly. Ubisoft have gone to lengths to make the freerunning more intuitive and using less input from the user. It works most of the time. Of course being a digital world there are not an infinitely unique range of trees and when certain stumps or trunks are repeated too closely, it can jar a little.

The weather also plays a large part of your time in the wilds, missions and sequences that occur in Winter will be covered in snow, this is beautifully realised, with drifts banking up around your legs as you slog through and the effort to move forward is perfectly implemented. 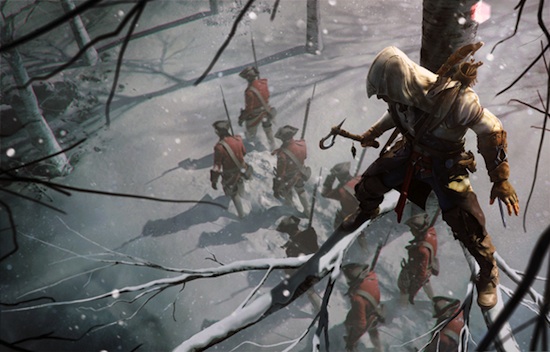 The city areas are suitably historical and while they do not have the verticality of Renaissance Venice the level of detail lavished on them is quite stunning. There are plenty of opportunities for climbing and roof running, leaping alleyways and the ubiquitous leaps of faith, but there seems to be less opportunity to hide or take a line of sight advantage.

This game is begging to be played at a gentle pace, the feedback around the internet is that gamers knocking over the campaign quickly find the pacing dull, but those that have invested in completing side missions have found the experience a lot richer. I will agree with this, it is easy to get distracted, either spending time hunting in the wild or just nosing around, the campaign may offer some spectacular set pieces that evoke that Last of the Mohican in you, but it is often the small encounters that stick with you. Not planning to complete the story quickly allows me to enjoy the environment, the combat and the side missions without feeling under pressure. The narrative supports the campaign well and the early twists certainly add value to your involvement and investment in the character of Connor.

The game does have a few irks and glitches, floating rifles and animals stuck in the scenery are frequent, while some scripted sequences can take on a mind of their own. An early event saw me following a pair of NPCs supposedly carrying a chest, they were off in the distance while the deranged box bounced after them. Every game has issues and in an undertaking of this size the level of forgiveness can be expanded.

The only real complaint is the ever present Desmond and his twisted family history, dropping out of the Animus was a clever twist in the early games, but now it is a pedestrian detour away from the action. It would be good to see a lot less of the Desmond sequences in the future and allow the community to accept they understand the premise of the theme.

In closing I have to say, I like this game a lot – enough even to go back and finally finish the last two to help me with the backstory, I’ll also be honest and say I a long way from completing this particular campaign, but I know enough of what it offers to be fair.

Multiplayer may warrant a short update of its own, now that my missing in action internet is back and the pre-Christmas rush is piling up on my desk.

Assassin’s Creed 3 is an ambitious game that deserves it’s occasional flaws or pacing issues to be ignored, Ubisoft have delivered a solid and engaging amount of gameplay and a revelation in the spectacular Naval sequences.