Hot on the heels of last year’s Crysis2 comes a refreshed and revitalised update of 2007 classic PC shooter Crysis. The game set 3 years before the sequel never made it to consoles, after disproving many doubters with Crysis2 developers Crytek have gone back to the future and delivered console gamers the experience they deserved.

Crysis on the XBLA/PSN networks is downloadable only and weighs in around 4 gigabytes, testament to some of the quality visuals that it consistently delivers. This version is very much an update of the original, new lighting effects and a slick nanosuit control scheme that will be familiar to players of the sequel.  For a title that is four years old under the hood, it rarely shows I have encountered some oddball behaviour with enemy AI and perhaps the weight of the ballistics feels a little old school, but on the whole it is really quite jaw dropping.

The narrative may be familiar to fans of the series and given the age of the game let’s not worry too much about spoiling anything. You play as Nomad one of a four man squad that is inserted into the Philippines to a fictional island, the main objective to rescue some U.S. hostages. Your secondary objective soon becomes apparent once the fight is brought to you on two fronts, formerly the North Koreans followed by the Extra Terrestrials that are tucked away inside the island’s mountain. What matters is how you get there alive and making the most of the nanosuit in the process.

After surviving a deadly free fall to the outskirts of the island and following a stock standard tutorial, you will hook up with the squad and progress. From to moment you splashdown the detail and artistry of the environment is quite apparent, especially once the day /night cycle kicks in and the sun begins to rise. There is no way around it, this game really is beautiful, Crysis2 may have been touted as having some of the very best graphics seen this generation. For a polished up version of its four year old sibling Crysis is doing a pretty good job of catching up. The environments look their best out in the open, with magnificent water effects, dense jungle and destructible buildings, all dripping with atmosphere. The game screams FarCry in many ways and that is not surprising being a previous Crytek title. It’s not often while taking cover under fire do I get distracted by the beautiful water lapping at my feet and start thinking about going for a swim.

In terms of the combat mechanics, fools that rush in will be punished; playing on hard doesn’t give you much leeway for taking damage and checkpoint restarts will some along quite frequently.  The game encourages you to play your own way, but the best strategies are often making use of the environment and nanosuit abilities to turn the battle in your favour. Take it slowly; remembering that slowly is not always stealthy switching between Stealth Mode and Armour Mode while popping up between covers is plenty of fun. Where the game does feel a little older is in the areas of ballistics and gunplay, zooming to iron sights can be clumsy and tends to fill the screen on anything without a scope making precision aiming difficult. This does get better when scoped weapons are available, but sometime the shots fired do not seem to register as you would expect, although not enough to deter. The enemy AI can sometimes be quite unnerving in the way it stalks you and then border on the ridiculous for inhuman long distance spotting or not reacting to an event nearby. 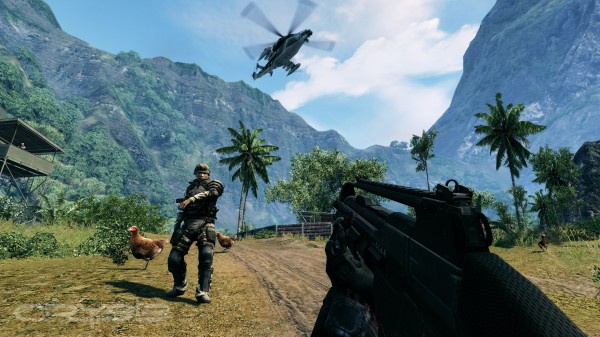 The levels are fairly wide open, offering the canny player multiple approaches to objectives and allowing plenty of replay value if you want to explore a new strategy. It is nice for once to have these options without being funnelled into narrow chokepoints to face enemies that infinitely respawn. Sneak around the back to attack from the rear or steal a vehicle and plough it through the checkpoint buildings – it’s your call.

Each level has a range of ongoing primary and secondary objectives, secondaries can be ignored, but it is wise to follow them up as they will open up the narrative and often lead you to a better position for the next primary objective.

Levels tend to house useable vehicles which add so much more, yes they may handle somewhat slippery, but being able to circumvent a level by capturing a vehicle is rewarding. Of course barrelling towards a group of soldiers, bailing out at the last second while the vehicle runs into them and then mopping up the survivors is also quite satisfying, but in a different way.

It’s worth mentioning that Crytek opted to not include the multiplayer component in this version and there are no plans to release any of the original expansions. I support this, there wouldn’t be anywhere near enough legs in the multiplayer when compared to the current crop of online gaming monsters. It’s a great single player game and needs to be treated as one.

So far, I love it as an older, but fresh shooter that offers me a creative way to play, I am happy to say that this 4 gigabyte download will stay put on my hard drive for the foreseeable future, because on a rainy day a replay of Crysis is probably going to be a good thing.

It is also fantastic to play a game of its age that offers more and stacks up better than some of the modern FPS franchises in the market today.  Get it and have fun. 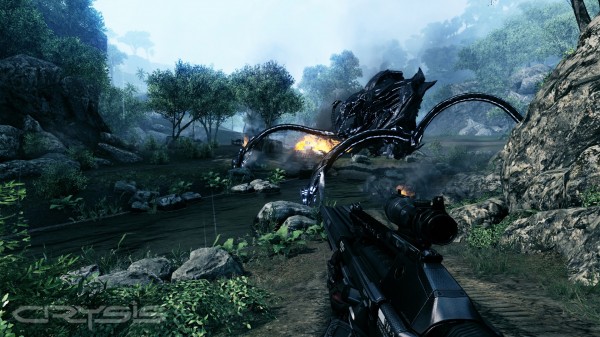