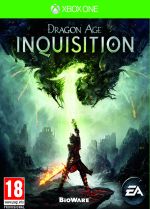 I once explained the cost of gaming to someone by breaking it down to a cost per hour and compared it to various other entertainments. Golf, three hours on a good day – $5 to $50 an hour. Ten Pin Bowling – $20 an hour. Go Karts – $60 an hour. Even a movie comes in at around $10 an hour.

Where is this going?

Well I just finished the main storyline of Dragon Age Inquisition, have a few left over things to complete but I can say now that it has cost me less than 50 cents an hour for this entertainment. Deluxe Edition, around $130. Time to complete main storyline, 262 hours! Now that is bang for your buck! 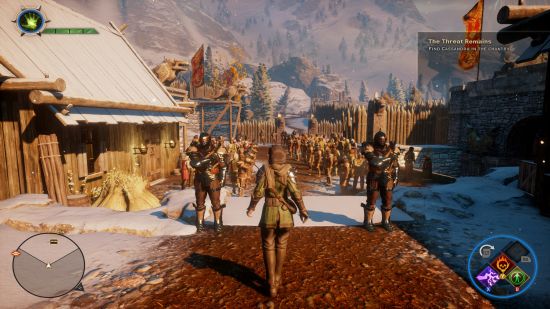 So as you can guess, to have put 262 hours into a game one must enjoy it, and enjoy it I did. Big, isn’t even a word that comes close to describing the size of the game world. This was made evident to me after finishing the first part of the game, which I though was big enough, only to have another five of six areas open up for me to explore. Most of which are bigger than the first area! Now I have to admit to wanting to explore every nook and cranny while trying to collect everything so that added to my play time. But really, if you get a game of this magnitude and don’t explore then you are really missing out. So many neat things to find and fantastic vistas to take in. And with the ability of fast travel and your trust steed you can get around fairly quickly. 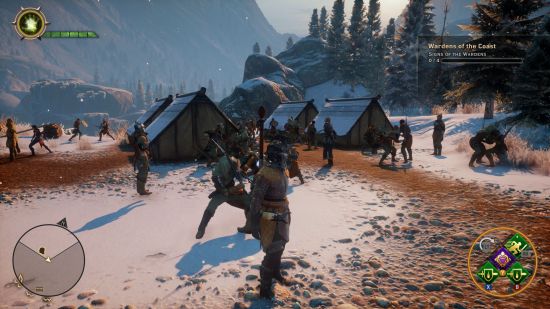 Story wise there is a lot going on with a side story and associated quests for all your NPC’s and the return of many familiar faces. Dialog is very heavy with almost every person in the game having something to say or a job for you to do, because saving the world can always take a back seat for animal rescue missions. The conversation wheel makes a return and allows the player to see what kind of interaction each response will have via an icon beside each choice. And be aware, the consequences for some choices are pretty dire. Conversations between your party when out adventuring are both informative and down right funny. Change up your party regularly as different members will have different things to say to each other. Gamers who have played the previous Dragon Age games will get much more out of these conversations and will appreciate key plot points much more than new players. But in saying that,  Dragon Age Inquisition is still very accessible to a new player. 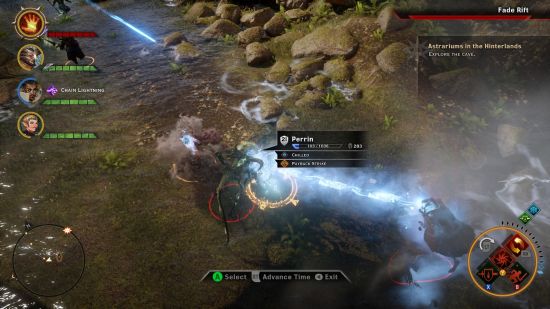 Combat can be dealt with in two ways, a more generic hack and slash style,which is ideal for mowing down the hordes of lower level enemies, and a more strategic turn based method ideal for those more difficult battles. You can switch between these two modes at the push of a button so even if a simple battle gets out of hand you can slow things down and reassess your battle plan. And to be honest, with the amount of offensive abilities you will amass, sometimes it is nice to slow down just to try something different. Loot is dropped by the bucket load by slain enemies and creatures but is also left lying around in chests and on tables. It is almost overwhelming at times sorting through new equipment and crafting items. Thankfully you have a sonar-like sixth sense which will ping out and locate any nearby items of interest. Carrying it all, well that is a different story and with no storage in your stronghold some tough decisions have to be made on what to keep. 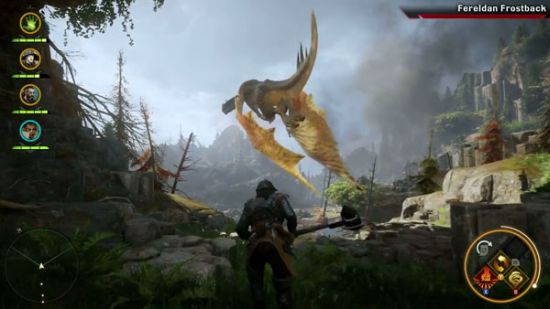 Yes there are dragons, no you can’t ride them, but it is truly a special moment when you come across one. The one I love is when you first see a dragon fighting an enemy on a coastal area. I won’t give away too much but suffice to say, it is one of those ‘special’ gaming moments. Enemies, along with environments are really diverse and given the size of the areas I never once felt like I was in the land of copy/paste. As mentioned some of the scenic vistas you will take in are truly beautiful. They pretty much justify a ‘sit’ button just to take in the moment. The visuals are complemented nicely by the audio work and the sound of a attacking dragon has never sounded better. There is the odd moment of  clipping with the graphics, typically with your party NPC’s while you are dealing with other NPC’s. Not a big deal but surely this should be a thing of the past by now?

Have I said how big Dragon Age Inquisition is? Well it is pretty bloody big. They story is top notch, the graphics and audio are great, even the replayability is right up there due to character choices and quest lines. There are also several moments during the game that are just so well done, spine tingling, tear in the eye type moments. Just brilliant. I did have some issues with buggy quests and achievements though. Unable to complete a quest due to quest giver disappearing is an example, although this only happened with side quests so didn’t affect the game at all. Just annoying to have unfinished quests in your logbook that you have actually done. I also missed a couple of achievements because of some reason, again not a huge deal, especially when I’m looking at a second play through. But even with these few negative points Dragon Age Inquisition is still my Game of the Year for 2014 and I can’t recommend it enough to everyone out there.