Engaging, cinematic and ballistic fun, but the cutscenes? I don’t get it… 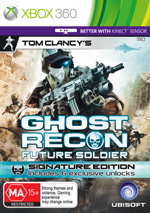 Last time I played a Ghost recon game it was the second game that slid into my 360 launch console, it was an impressive opener for the generation. Lots of neat tricks, lots of shiny graphics, although the gameplay was a bit ho-hum and the multiplayer was a lagfest. I never got round to completing the game, mainly because my other launch title was Oblivion and that just sucked the hours away.

It is now 2012 and the future is always a near, yet promising thing. In the world laid out for us, the Ghosts are still technically advanced soldiers that are into high risk strike warfare, sneaking in winning the battle hard and fast and getting out alive. The series still carries the Tom Clancy banner and rightly so, there is enough hokum around the narrative and the gadgets are suitably expensive. 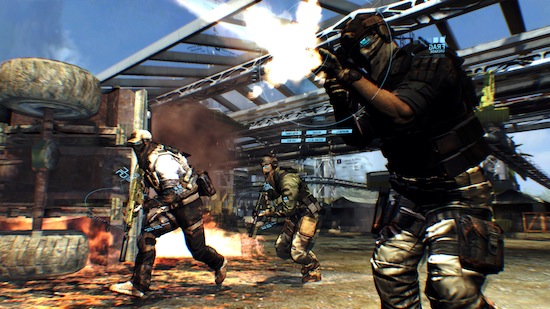 This game has a reasonably weighty campaign, which feels a bit little like a staged showcase for the gadgets and to get you through basic training for the online modes. Single player Future Soldier is slick, really slick; the play mechanics are responsive and intelligent enough to make you feel like an athletic super soldier. A lot of the actions are context driven, which helps, vaulting a wall looks great and feels fluid. Darting from cover to cover is almost semi-automatic, target the next wall and hold down the ‘A’ button – your Ghost will do the rest. It is smooth and I like it, I can think of other third person shooters where leaving cover, finding and sprinting to the next cover can often end in disaster this game does all the hard work for you. The weapons on offer, while familiar to FPS fans feel great, there is some weight to them and they do their job by damaging the enemy, no full clips into one Kevlar-wearing baddie here.

The gadgets when you get them are suitably Clancy, ranging from thrown scanners to flying and ground based UAVs they certainly give you the edge in combat, one in particular The Warhound is a robotic mortar / missile platform that follows your group. While the use and implementation of The Warhound is a lot of fun I think it either stretches the Future Soldier tag or shows that the rest of the arsenal is not nearly Future enough. Besides which its lumbering gait which resembles a monstrous robotic dog trotting along beside you is almost comical. Not forgetting the ‘it works if you stand still’ Predator style camouflage, this pulled off quite nicely.

Stealth comes in the form of sneaking around levels and prioritizing targets, one of the nicest ways to eliminate a group of hostile is to mark the targets for the team and let them take them out in a synchronized shot. This is a satisfying way to ease your way around enemy territory and often gives you options when approaching a level a second time around.

The narrative is typically global and lurches from hotspot to warzone with consummate ease, I’m surprised these characters never complain of jetlag. Presentation is spot on, the environments are beautifully modeled and the in-game characters are suitably moody, tooled up and soldier like. Where the game does fail is in the cut-scenes, character models take a step back by one console generation. After recent treats such as Mass Effect or the Witcher, watching these no neck, ugly models trying to lip-sync really pulls you out of the moment. Otherwise the game is immersive and the camera does some pretty clever things in the middle of the action, taking the cinematic intervention in other big franchises and turning it up a notch. There are scripted moments that add a level of realistic movement and awareness to your situation, such as peering under a door as it rises. While you can’t interact with the scene, you feel that you could if you had to. Something that works exceptionally well is the extraction of a non-combatant, switching to side arm your character man handles the rescuee through the level and the camera is constantly moving to follow you and your changing perspective. It works really well and makes you feel like that hero, if only for a moment. 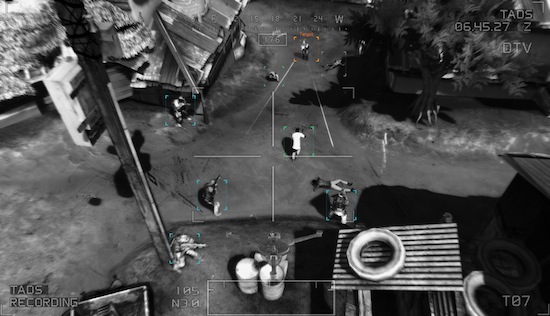 There is also an extensive multiplayer offering, maintaining the third person perspective and offering more strategic game types than the usual fare, Future Soldier offers a serious change of pace. It will take some getting used, but it is a slower game than other third person battles we know. Ghost recon needs patience, strategy and teamwork and as a child of the Gears of War generation I struggled with that concept initially. Stick at it and there is a satisfying game right there.

There is also a standard horde style mode, which doesn’t really hold attention that much, the campaign can also be played in co-op with three other players, but not as a drop in – your team must be assembled before launching a mission.

With E3 just around the corner I have to give a nod to Gunsmith, a feature that was lauded at E3 2011. The Kinect functionality works well, the motions are sensibly mapped and very responsive, even the shooting range can be a reasonable distraction, giving you the ability to fire weapons with the palm of your hand. However it is an add on and while it may be showing us the way forward it works just as well with the controller. The heart of Gunsmith is about customising your weapons and the amount of unlockables that can allow you to do that is quite substantial.

Overall Future Soldier is a great package, the Campaign stands up as a good time with some truly immersive cinematic moments and the multiplayer offers a great change of pace compared to other games in the genre. I like it, a lot, but I don’t know if I’ll still be playing in a months’ time. 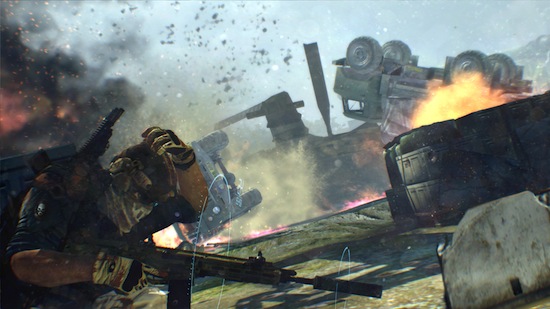