Not all retro revisits end in disappointment, Chris Wild is bringing one of the greatest 8-bit games back to life in December 2012 and it stands up tall.

The mid eighties were a blessed time for gaming, the teenage years of a fledgling industry – nobody could see the growth that was coming, yet even today those of us that were there still hanker after those early experiences and those that were not there are intrigued by the legends. Yearning for some of the magic that was squeezed into 48 or 64 kilobytes can be a distraction, more often than not the return to those 8-bit pastures is tinged with a sour taste. These games and game designers shaped the generation and many of those respected one man bands have become industry stalwarts today.

One such luminarie was the recently passed Mike Singleton, a standout talent responsible for some of the better memories of those days. Arguably one of his finest creations was that of the land of Midnight, centered around an unfinished trilogy that began life on the ZX Spectrum and now thanks to tireless efforts from Mr Chris Wild the war in Midnight continues on into the new millenia on the latest household platforms. Chris caught the Midnight bug and has devoted many, many hours to remakes and projects surrounding the game, when his friend Mike died in October 2012 he had to dig deep to complete this new take on the game and the result, while missing some of the new bells that he and Mike had planned is a perfect addition to the family. 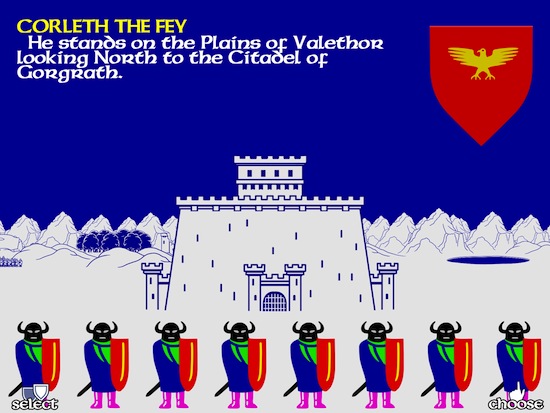 Having recently had some time with the version submitted to Apple for their store I have scratched an itch that had been bothering me for a long time. Its worth mentioning now that the submission has been approved and has a scheduled release date of the 21st December – the Winter Solstice. A date relevant to the game and its narrative, to save any smug cryptic comments. Ironic really that my biggest single period with the game was on a Commodore 64 during some blistering Summer holidays, but then going to bed gripped by the Ice Fear may have been a good thing back then.

Lords of Midnight is a game that crosses genre boundaries, it is a game that was ambitious and innovative, it was a game that captured your imagination and delivered a vast open world with day / night cycles, you had choices and you were free to make them.

The premise is very much along the lines of a Tolkien fantasy, a vast icy land ruled by a despotic evil in the North and the many Lords of the free in the South. Picking up the narrative after the introductory novella, which is available to read here, the game launches with four playable characters Luxor, Morkin, Corleth and Rorthron. From that point on, you are on your own to play the game as you wish.

Luxor and Morkin are Father and Son, Luxor can recruit and command the armies of the South which means he can rally the Lords of Midnight and face Doomdark’s army head on in a war of attrition. Morkin on the other hand has  aquest of his own, he is the only character that can slip into Doomdark’s lair and destroy the Ice-crown, think Frodo and Mount Doom here. Corleth is one of the enigmatic Fey, a popular reference would be Elves, he can recruit from the Fey Lords that live deep in the forests of Midnight and proves to be an essential ally. Rorthron on the other hand is a mage and like other mages is ‘not interfering’, until they do.

For the enemy there are a mixed selection of win conditions, centering on the deaths of Morkin and Luxor, or the sacking of the Citadel of Xajorkith, on the good side – the free can press on if Morkin is lost and should Luxor perish, Morkin can collect his Moon ring enabling him with command of the Southern Armies. 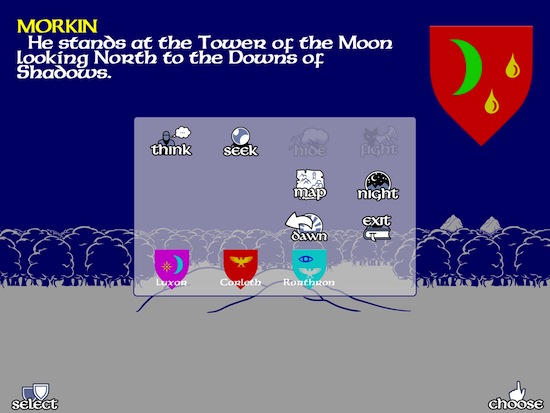 Lords of Midnight was marketed as an ‘Epic’ game and that badge is still in place, the graphics were meant to be overhauled, but the original 8-bit palette and styling really hold to the history of the game. The most innovative feature of the time was the nature of the pseudo 3d as you moved around the world. Singelton dubbed it ‘Landscaping’, the map is laid out with various geographical areas, these are scaled closer or farther away as you move around. The result is a smooth and simplistically beautiful view of Midnight. where it gets really clever is when the armies of the enemy are abroad, even now I get a chill when pushing Morkin through a mountain ravine only to spie the flags of Doomdark soldiers in the valley ahead. Static screens will not do it justice, but a few minutes of moving around will make everything clear.

One of the new improvements introduced by Chris Wild is the inclusion of a map, both at Midnight level and a more close up tactical view. This is a welcome addition, thirty years ago we either had to make our own maps or keep centrefold versions that magazines printed, moving around Midnight is now not only pleasant visually, but also less of a headless chicken run. It is also possible to drag and drop groups of Lords to ease movement, having spent a Summer holiday moving them all one by one I like this feature.

As far as touch screen controls go they do the job, moving characters around works well, but I find that they can become too comfortable and it is easy to send characters off the wrong way. Given their state of mind and physical condition dictate movement and combat effectiveness, wasting moves as night falls can prove to be challenging.

The menus or user interface offers all the context relevant choices for each character, although there were a couple of times where a simple ‘back’ would have allowed me to make a different icon choice rather than quitting back to the game view and starting again. That said, Chris Wild has done a sterling job on the conversion and having seen the commitment and passion he needed to bring this project to the marketplace, I’m sure he will be supporting the game with a few tweaks. 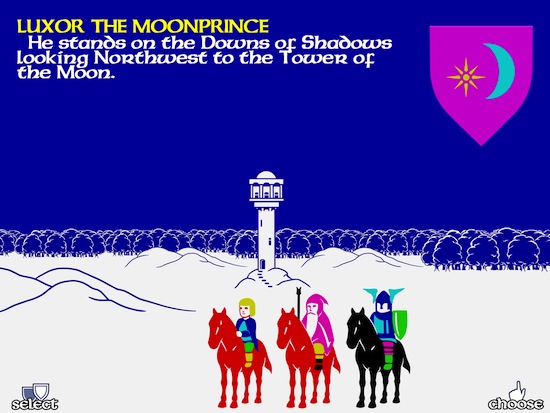 Ultimately this game delivers on its promise, it was and always will be an ‘epic’ game, a strategy game that is also an adventure, from the moment you start taking those first steps it is your story and how you play will be different to the next player. Lords of Midnight is a wolf in sheep’s clothing, under that low res, harshly coloured exterior lies a beating heart of parameters that can swing your game in a moment and as your story develops so will the anecdotes. It is funny how inspiring a static image and a few lines of text can be, but anybody with half an imagination can see their character shaking snow off the morning after hiding in some ruins, breathing crisp air and wondering if the army in the distance is heading away from them.

The day/night cycle is critical to the game as Doomdark’s forces move South during the hours of darkness, this also delivers the morning commentary based on the battles that occurred through the night. This can be unsettling to read as battle reports come back from areas where you know you had a main character hanging out.

Lords of Midnight is an experience that everybody with a remote interest in games should have, buying into your characters and developing your own war stories is a wonderful thing. It is a game with hidden depths that deserve to be plumbed and I cannot recommend it enough. By current standards people might not get the art style, but it really is about what is under the hood, it is also a perfect game for quick drop in / drop-out gameplay on iThings.

As night falls on this session I have to say that above 99% of other remakes of old games become five minute distractions if they are good enough. Lords of Midnight is still captivating and still making it’s mark, I just hope that it gets a fair hearing by the masses. It would be good to see Chris supported for all the effort he had put into bringing the game back to life and Mike Singleton celebrated in his memory along with the inspirational achievement of squeezing Lords of Midnight into those early machines.

For now it is safe to say, come the 21st, I’ll be deleting the approved beta version I have and re-buying from the app store to at least show my thanks, you should buy it too. 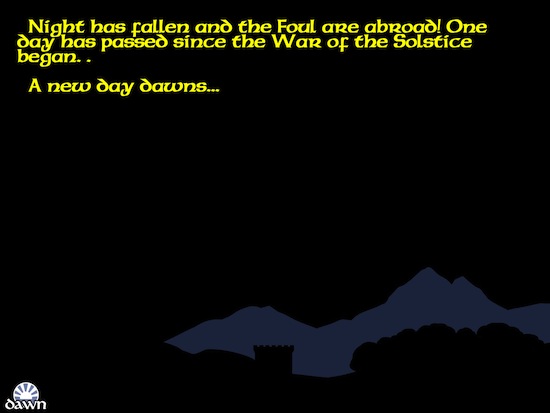