The Run offers a great concept that has been done before, but I had hopes that this game could recreate the highs and lows of a cross country race in the vein of the movies I grew up on in the seventies.

Having taken a break from arcade racers I was blindsided by Need for Speed: Hot Pursuit when it dropped onto my desk during late 2010, that game for me reinvigorated the genre. On all levels the title operated at the ridiculous, supersonic weaponised cars, gratuitous takedowns, excellent graphics and the introduction of the addictive Autolog. Imagine my excitement when I heard all that the next step in the Need for Speed franchise was to take me on a no holds barred American cross country race.

Sadly the concept got lost along the way, the game is a collection of stages, some more annoying than others. While it may have been a big ask to stream the entire race, I would much rather have to battle the pack along the way, making pit stops for repairs and refuels rather than the current structure. The stages are spread in to different categories and while your choice of car can make some of them near impossible to complete there are few opportunities to change vehicle. Ranging from standard point to point races, to time trials, and battles between single or multiple opponents there is variety, but the method of mixing them up is simply jarring. Some of the stages are so irritating that I really wouldn’t be bothered about playing them again.

For the developers I understand why they have done this, but there could have been so much more satisfaction battling through the larger pack, seeing the lead change hands and driving dirty to eliminate your rivals. It could have been such a different game and at present represents for me one of the biggest missed opportunities I have seen in a long time. 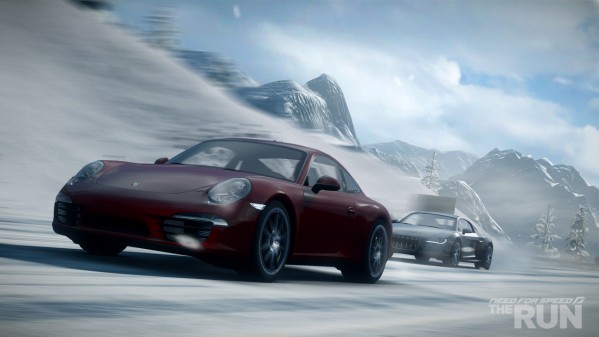 Furthermore the driving mechanics are mostly sloppy, where Hot Pursuit had it nailed, The Run often feels like you are just a nudge away from spinning out. The various stages offer such inconsistency where in one race I can steamroll around a corner ripping through a fence and edging a lead, the next race will hit me with a restart for drifting onto the verge for a second or two, and that’s without mentioning the occasional indestructible telephone pole that keeps jumping out at me.

There are no significant takedowns, you can wear down and gain experience for knocking out a cop car, but after the destructive joy of Hot Pursuit, where is the chance to wipe out the opposition? Glancing blows will always see you coming worse off, as the psychic AI driver screams off into the distance pipping you to the checkpoint by a single second, again.

The second outing for Autolog seems to have missed the point, admittedly my once thriving Autolog friends list is currently pretty flat, but it doesn’t drive the addictive competitiveness that the first instance did. The most exciting aspect is the update that keeps you abreast of your progress and whether you are the fastest amongst your friends for the race in total.

Another clumsy addition is the reset button, fail a race of be wiped out by a head on collision and you will be transported back to a previous checkpoint,  with limited rewinds per stage you need to be careful with them, most stages are straightforward enough to not worry, but the unforgiving ones are tucked away in there. Given that rewind functions have been around for a while, it may have paid off to make it a little more ‘Forza’ rather than have me sat watching a blank screen before diving back in to the frustration.

Finally, the biggest point of difference with the game is the back-story. It has been set up in the vein of an action movie, complete with cut scenes, villains and QuickTime events. Let’s be honest, it really doesn’t need this aspect bolted on, tell me to race and I’ll race I really don’t care about pointy eared Jack and his debt problems. I especially don’t care for QuickTime events, no matter how easy they are.

Overall the game feels like a missed opportunity, it has a few moments, but I struggle to find the drive to keep going, I know I will go back to Hot Pursuit some day and I still hold out hope for a more open, strategic and flowing game along the lines of The Run without the silliness or record breaking ‘rubberbanding’.