Take a couple of fondly remembered puzzle franchises, mix them up with some multiplayer add a party machine like the Ninetendo Switch and what do you get?

The original Gameboy for me was all about Tetris, that grey/green liquid crystal display and the unforgettable theme tune pumping away. Dropping blocks at speed and holding that big heavy handheld up to my nose in bad light. Yes, those were the days. Puyo Puyo, not so much. To be honest it has passed me by until now and while I could happily rank Tetris up alongside the the Rubik Cube or Othello as ‘easy to learn, difficult to master’ cultural icons I have to say Puyo Puyo is new to me. 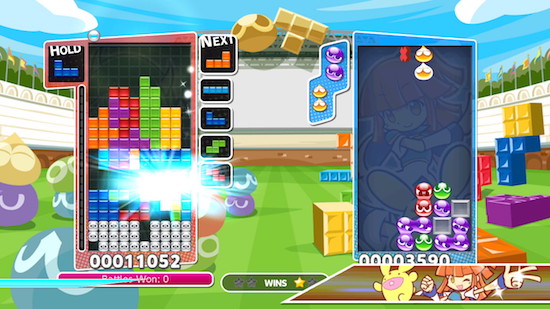 That said, it’s a fun match-four puzzler. The liquid aspects of the pieces means you can with some forethought build up reasonable combos, getting collapsing lines to meld and add to your score multiplier. It’s also colourful and noisy, especially in career mode, where various Managa-esque characters battle at Puyo Puyo, chatter inanely at each other while throwing in the odd special move).

I have seen and played titles that are similar to Puyo Puyo in my time, but I don’t find it has the long term appeal of Tetris or Puzzle Bobble. The version of Tetris that is here flows nicely, being able to park a piece and see the next two pieces add to the strategy, but at its heart it is still Tetris and that really is as simple as it gets. 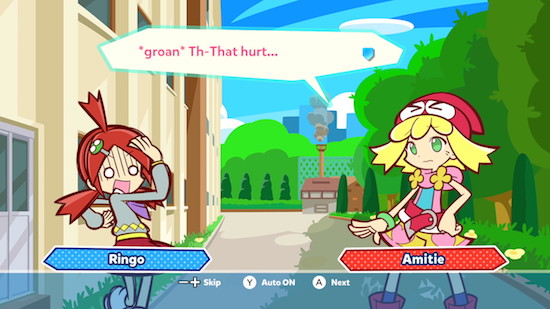 Career modes aside the game on the Switch is all about playing competitively, either on the couch or online. This is perfect for the Switch and if the mood takes you being able to play the two different games in a vs. mode is a bonus. No more arguing the toss over who gets to play their strongest game. You bring Puyo Puyo and I’ll play Tetris. As usual you are both up against the clock and each other, where multi line combos start piling useless blocks onto your opponent. These battles can be played against humans (preferable) or the AI (incredibly adept at scuppering your game with combo attacks). So make your choice, but to be honest to keep it real and have the most fun, taking the battles online or to the couch is your best option. 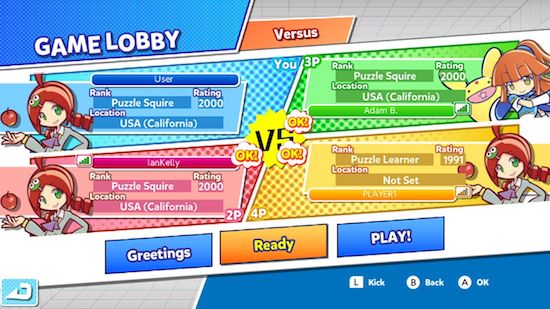 This is a short review, but there’s not a lot to say. Puyo Puyo Tetris is at its heart a fun pick up and play experience for the couch, its not really a long term play for someone that wants to relive either of the games. In short bursts it fills a gap, but there will always be something bigger and better gnawing at your to do list.