Pirates, Ninja and Robots – you can’t really go wrong when making movies about any of these things. Real Steel is no exception, it might not be deep and it might not be winning many awards, but it is damn fine entertainment. This is a fairly predictable Hollywood exercise in taking the audience out for a spin, but it shows some soul along with the fireworks. The opening credits are really quite beautiful and if it wasn’t for Hugh Jackman being present in the scene, I would have wondered whether I was in the right theatre.

Being one of those ‘ten minutes into the future’ movies gives its premise the chance to thrive without getting bogged down in sci-fi hokum. The characters live in a world where boxing is played out by Robots, human controlled behemoths that ignore the ‘bigger they are, harder they fall’ rule. There are touches of the future and well integrated they are too, mostly in touch screen interfaces and phones that are probably not too far away, then of course there are the fighting machines, the first of which should start going into production a couple of years from now. 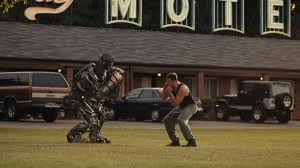 Jackman’s down on his luck ex -boxer character is somebody we have seen before, he owes everybody money and can’t seem to put a foot right. He is a man that is  a leftover from the age when humans boxed and that brings an element of sadness to his cocky character that is trying to make his way fighting robots instead of people. His support comes in the form of Evangeline Lilly, who does a great job of being the stalwart gym-running mechanic and longtime unfulfilled love interest. Their relationship is tested through the course of the movie, but not to breaking point and the roller coaster ride of emotion that comes with in-movie boxing soon throws them back into each others arms.It is Jackman’s long lost eleven year old son that adds spice, as Jackman is initially frosty and distant, but a shared interest and their passion brings compromise and the chance to regain that lost fatherhood.

The other stars of the movie are the robots, a variety of which are seen punching seven bells out of each other in  the ring,what has been delivered here is a subtle use of special effects that works on your sense of disbelief. I find on the whole the overload of effects in a Transformers movie can leave me feeling numb and disinterested, but taking these characters (robots) and putting them into the arena of a high cost boxing match gives me something to cheer for. There is no denying it, once the old Rocky magic starts to work your emotional investment in the movie accelerates. No more so than for Atom, the supporting star and the boxing newcomer trained by Jackman and son.

Atom leaves you wondering about his level of humanity, even during the movie I had different scenarios popping up where the Hollywood machine could have used Atom more, they could have made him get up and finish the fight on his own without me challenging it too much. This smaller, basic and more recognisably human robot builds character through his lack of independent movement and action. I can see the Oscar announcement for ‘Best Supporting Actor in a GCI role…’ already.

In basic terms, Real Steel is a whole lotta fun and deserves a watch. Disengage your brain, grab some popcorn and get a taste of that Rocky magic that can be oh so inspirational. So inspirational I drove home planning to dust of my Kinect Sports Boxing and almost wishing that Microsoft do have a licensed Kinect game up their sleeves for this movie.