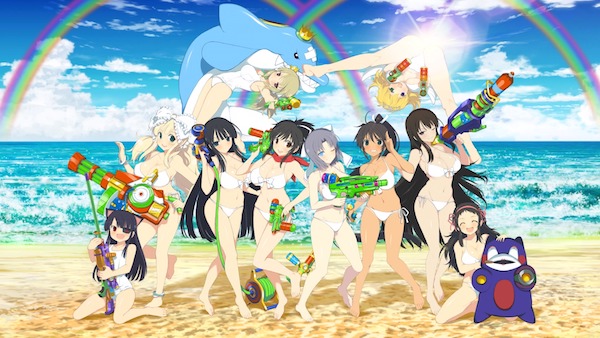 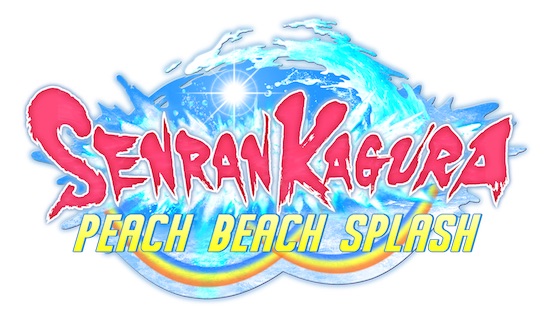 Or to give it a real intro “PEACHY BEACHY SPLASHY!” according to the deep, gravelly voiced, shouty announcer.

The Senran Kagura franchise has been around a while, mostly known for fighting games centred around the Shinobi warriors of its cast list, who all happen to be Manga styled busty maidens. Presented in classic cel-shaded animation the ladies bounce through their fights and become more undressed as things go. Peach Beach Splash is no exception, apart from the setting of the narrative, which seems to have dragged the characters from the Ninja Schools for a summertime water pistol competition. 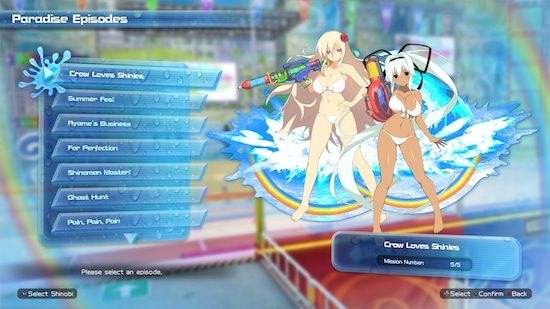 Its a paper thin excuse to get the ladies in bikinis and have them run around a Splatoon-esque arena game, but each to their own.

Peach Beach Splash is undoubtedly aimed at the Japanese market, that much is obvious, a culture that is not afraid to have fun with games in this vein without feeling uncomfortable of having to make excuses as to why the screen is suddenly filled with bouncing, yet tastefully covered cartoon boobs.

There is also a whole heap of humour that probably skims well over the head of the Western market demographic, the cutscenes are wordy and subtitled – there are a number of story driven stages to work through with each school. Each of these stages is introduced with a cartoon of sorts with the characters standing around overworking the dialogue. What starts off mildly entertaining soon becomes a skip mission, unless I assume you get the jokes. 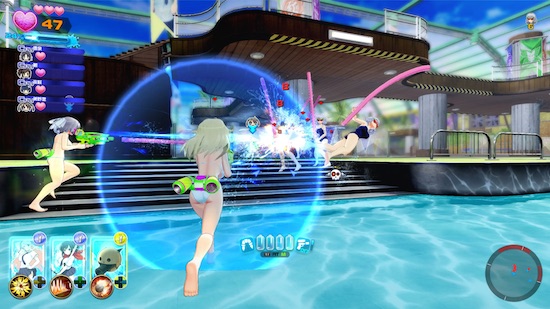 These levels serve to build up your roster of characters, from a bank of thirty, where winning stages will give you access to special power up cards and coins to buy upgrades and accessories. Cards can be assigned to characters before combat, these buffs will become available during the match and at lower levels can turn the tide at a quick press of the d-pad.

That said at the higher levels of difficulty, the game swamps you and its easy to lose the whole team in seconds, I put this down to having not levelled characters enough to withstand the AI. So to beat the narrative arcs for the schools and actually get some breathing space in the arenas some effort will be required.

Aside from the story games, there are Horde style modes to plough through, some limited character missions and the straight up combat arena. Online offers a number of modes with ‘capture the Bra’ sounding fun, but at the time of writing I have been unable to contact an online game, it will be interesting to see if the online community takes hold after launch. 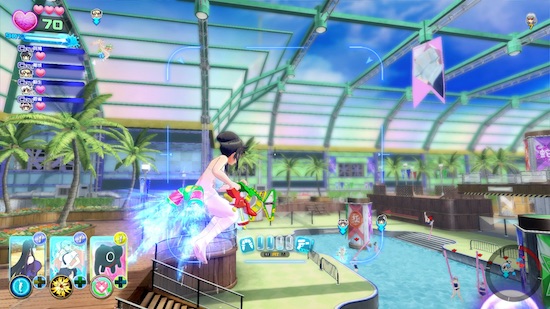 There is a great deal of variety in the arenas ranging from dedicated wet areas, pools, beaches, pirate ships and great Bushido themed schools. There is obviously a lot of love put into the game and levels all offer plenty of verticality where the girls can ascend by their mini water jetpacks. At the cost of ammunition of course.

At its heart the game does a reasonable job, but, it quickly descends into chaos and without balance you can find yourself lost in the middle of a multitude of buffs, super moves and water guns. When this happens the camera shows its failings and trying to counter with your own cards seems more often to be an exercise in attacking a nearby wall. 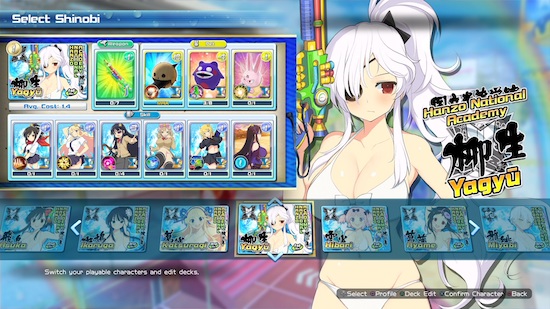 There are a number of weapon types available in the game and each use their ammunition at a different rate, offering different and very standard styles of attack – quick and light vs slow and heavy. All with pros and cons that will take time to learn and enjoy. Once the water tanks are empty the Shinobi in question will have to take a moment to stop and vigorously pump in more ammunition. All well and good, but the AI never seems to run out and if they do, its hard to spot them pumping away in the open.

Alongside the main game there are a few optional extras, libraries of images and cartoon intros to relive. A diorama mode where you can spend hours tinkering with the cartoon models and give them wistful looks or the store which will give you the  chance to buy new costumes for your favourite busty ninja, from a shopkeeper who is actually a rotation of one of your favourite busty ninjas. 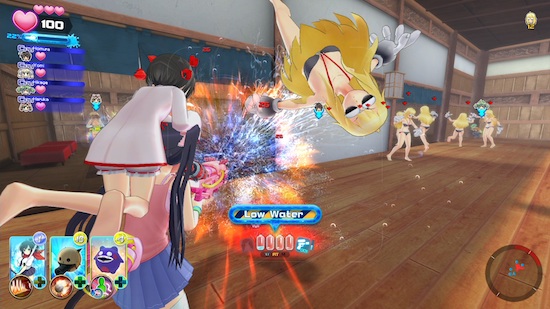 Overall, Peach Beach Splash is a fun, if short term diversion. It’s good to see more of those Japanese exclusives coming our way regardless of which end of the taste spectrum they lay in. It is easy to write the game off due to its content, but you naturally look past the beachwear, butts and boobs once the game starts and the water starts to flow.

At its heart the girls have offered up a lighthearted party game that may carry an age restriction, but really doesn’t take itself too seriously. Fans of the series will lap it up and anybody that ever wished for a game of good clean fun that Benny Hill could have made, well, here it is.