There is something wrong with Trap Team, it just made previous Skylanders games dull and boring. 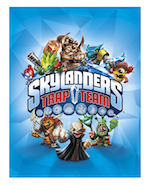 There must be a secret Skylander Think Tank somewhere in the world, a vault of creativity constantly pursuing where to take the series next. Working out how to build on such popularity, break fourth walls, create new inspiring characters and of course, convince legions of parents to buy more collectibles. I’d love to see it.

Christmas is coming and the Skylanders are back in town, this time they’re not alone. 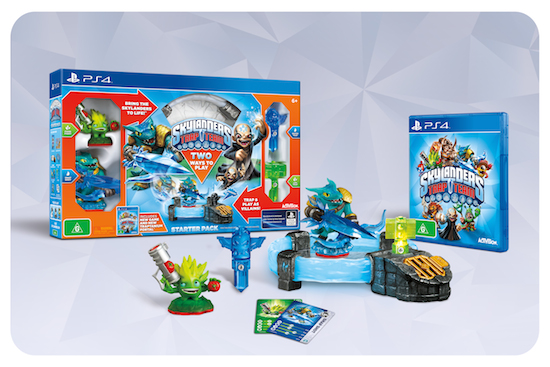 Trap Team is a step up from the interchangeable innovation that Swap Force brought into play, the game’s story is set up around naughty Mr Kaos and his destroying of Cloudcracker Prison. That prison being the home of a number of Skylands nefarious villains, villains that the player must track down and bring to justice. Of course there is a twist and that is where the Trap Master figures come in, primary Skylanders with oversize Traptanium (plastic) weapons. The prison was also built out of Traptanium, fragments of said Traptanium have found their way into the players possession and once a key villain has been defeated by a Trap Master they can be ‘trapped’ in the Traptanium shard. 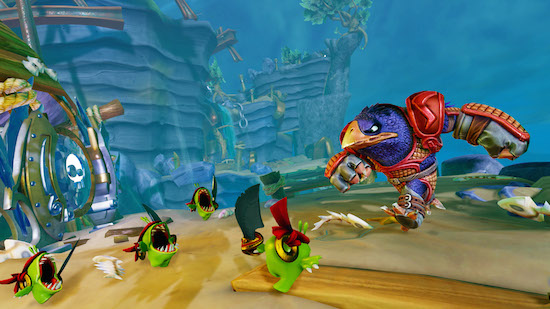 It plays out like this: Beat a villain, nefarious or not, then once they are vanquished the game will make an offer to trap the villain in a Trap that matches their colour / elemental alignment. All well and good, there’s a new hold in the portal unit and the Trap slots in nicely. Once the villain is trapped you have the option to use them in the game for good, by swapping in as a tag-team, and by completing personal quests the villain will ultimately become good. Villains not in the Trap or that cannot be stored are automatically transferred into the vault at the hub-world. The entertainment value (especially for the young’ns)  is also a big factor because making up for the lack of an actual villain model is their inane chatter. A speaker at the front of the portal drivels out a stream of funny nonsense particular to each character collected, needless to say with two small boys in the house this is a big hit. 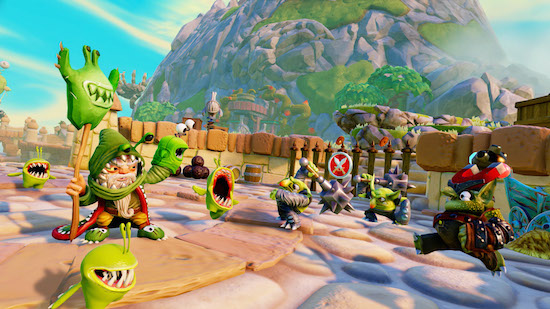 Aside from the new-fangled gadgets and pocket money killing collectibles the game itself is big, bright and crisp. The cartoon-like environments of Skylands are glorious, the style is undoubtedly Skylanders and the palette wold make  a Piñata game look grey. Where it feels very different is the user interface and options, there is a ‘big button’ feel to the presentation. This I put down to keeping the game design in parallel with the recently launched iDevice version, incidentally the full game with its own starter pack and portal, the menus feel like they belong on a touch screen device. I don’t have any issue with it, just an observation. 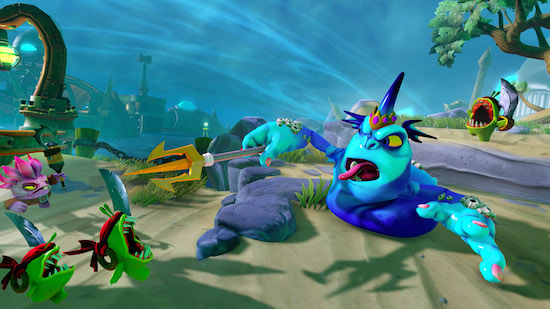 The gameplay seems smoother and perhaps more forgiving than Swap Force, as the series has developed over the last few years features have been added and the original audience has grown with the game. However, entry level players that struggled with the introduction of jumping in Swap Force won’t be overtaxed once they get the gist of the Trap mechanics. The story lead side of the game treads familiar boards, follow the corridor, find secrets, complete challenges and battle through to the end. At its most basic, a candy striped dungeon crawler, but it is a bucket load of fun.

The battle arenas are back for the occasional thrash to earn more gold and experience, but in my eyes they are surpassed by the introduction of the Kaos Challenge Mode. Basically a Tower Defence variant, with towers and Skylanders what more could you want? 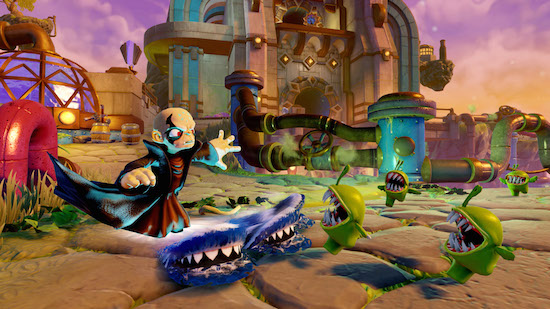 Levelling up is now back in the camp of the fairy Persephone, with a slightly annoying menu system and not being able to view a Skylanders full skill tree. Only the next three upgrades are visible at a time, being a nosey Skylander in Swap Force I did prefer checking out all the options before committing to spending the gold. It’s good to see Skylanders from previous games also getting access to new skills and buffs too.

Overall Trap Team is a great addition to the Skylanders stable, offering more interactivity through the trap system, but also more opportunity for spending as I already have my eye on a couple more Trap Masters and the rest of the elemental traps. The models as always look fantastic and while not really being toys to play with, they certainly look good when lined up on a shelf. Giants was good, Swap Force was better and now Trap Team has left them behind. It’s accessible, funny and full of potential, I can’t wait to see where we go next year.