Welcome back to Tamriel. 1000 years before The Dragonborn and the events of Skyrim and the land of Tamriel is in turmoil. Three great factions are battling for power over all the land. So chose a side, take up arms and wander the countryside picking flowers and chopping wood. But even though Elder Scrolls Online is touted as a MMORPG there is plenty to be had in here for all the solo role players out there. And after all it is an Elder Scrolls game so don’t push it aside just because you are a loner… 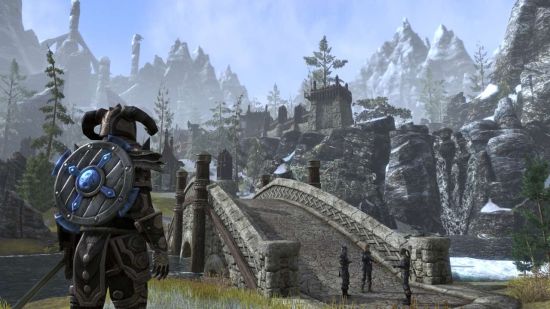 Lets get my biggest gripes out of the way first, and thankfully these problems don’t directly affect the gameplay itself. Due to to nature of the beast that is MMO’s, I found myself waiting for quite lengthy times when logging in and even when transitioning to other areas. I’m talking about walk away, make a cuppa, come back, still not loaded waits. Pretty bloody horrendous actually. Although it seems these types of waits have disappeared recently, less players or upgraded servers, who knows. I did sign up for the Elder Scrolls Plus membership as it is the cheapest way to get some ‘Crowns’, the in game currency. But it didn’t mention anything about priority queues or anything. Anyway it is definitely much better. As for any other bugs, they seem to be mostly cosmetic and are being fixed at a reasonable pace by the development team. 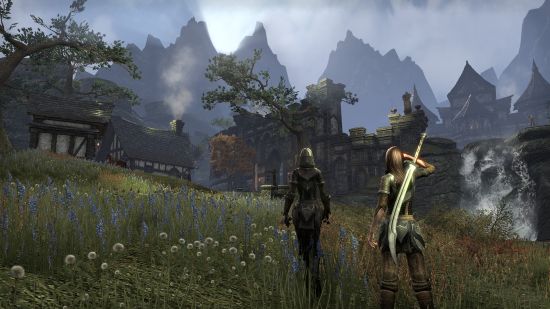 Character generation and development is pretty typical of an Elder Scrolls game with the one big catch, which I was unaware of, being your chosen faction dictates your starting zones. Not to worry though, you still get to explore all the areas but the city of Daggerfall can be your starting point or one of the last places to find depending on your choice of faction. The other aspect of the faction you join is it decides who you will be fighting along side in the PvP (Player vs. Player) zone. Now I don’t know if it isn’t popular or I was just on at a quiet time but my first venture into PvP had me all alone with NPC’s (Non-Player Characters) as opposition. It was fun though, with a variety of missions and the overarching goal of controlling as many Elder Scrolls as possible, reminded me of Capture The Flag. Your character carries over between zones so you can use the open world side of things to ensure you are well geared up for the PvP zone. 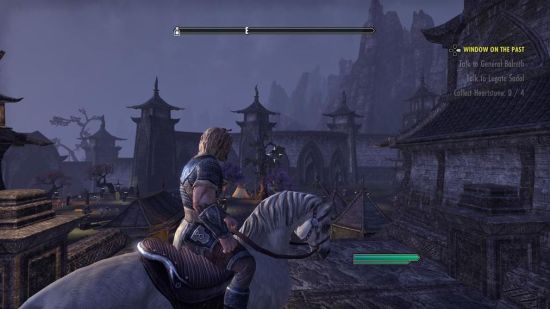 Even when running as a solo player you can still team up with others to hit some of the harder group dungeons, which are required for some quests and even just help out others in the open world with encounters you may pass by. As a single player game ESO still retains a very Oblivion/Skyrim feel, apart from the hugely long research times when dealing with crafting items. I’m talking days here, not hours! The variation in scenery is there for the different areas but fails with many of the interiors. Almost every ‘castle’ I have been in has the same layout and look, as do many merchant buildings. I guess it makes it easier to spot the Blacksmith when entering a new town. The sound is pretty good and there is nothing like hearing a Dark Anchor dropping and having all the players in the area head in to destroy it. 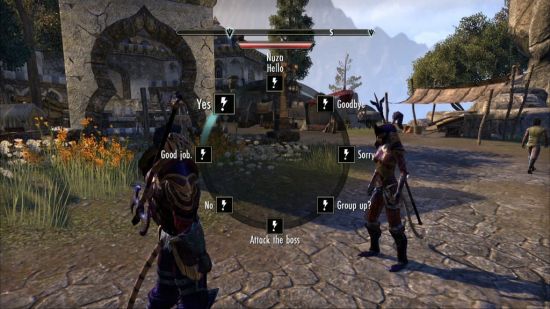 Combat is pretty good with a wide variety of skills and abilities available in each class, and much of the gear you find looks fantastic, causing a looks verses attributes decision. I guess that brings up the what do you ‘buy’ question. Being a MMO there is indeed a Premium Marketplace but all the items are just aesthetics, pet’s that follow you around, horses and other mounts, and armour designs. So you don’t have to purchase anything to get the most out of ESO. Both the Adventurers Pack and Explorers Pack contain treasure maps but again don’t worry if you don’t have them. The treasures aren’t unique but just decent levelled items for the area you are in. Even the ESO Plus upgrade doesn’t do too much to improve your time in the game. So really if anything, grab a month of ESO Plus, buy the Adventurers Pack with the included Crowns and then cancel your ESO Plus subscription.

I have to admit, I was a bit sceptical about my beloved Elder Scrolls going MMO, but after a hundred or so hours in game, I would have to say it is pretty damn fun. Yes there is that ‘grind’ you would expect from a MMO but if you really wanted to you could completely ignore the crafting and research side of things and just play with what you find or buy from the shops. The story is pretty forgettable overall but some of the quests and side missions are well done and fun to do. By reading the list of achievements I can see some of the old favourites quest lines are back and I am yet to come across them. One thing I am hoping is to find some Netches in Morrowind, which would have been much easier if I had been a different faction at the start. So plenty of exploring to go. I really thoughta the timing of release would kill ESO with it following so close behind The Witcher 3, and with me having to stop playing The Witcher 3 to get into this I thought wouldn’t be good. But now I am in no hurry to stop playing ESO and have the nice thought of having The Witcher 3 waiting for me when I have finished with my time in Tamriel. The Elder Scrolls Online: Tamriel Unlimited, highly recommended!