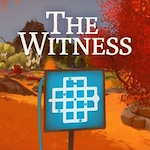 The long awaited follow up to Braid has finally arrived and Jonathan Blow has not failed to give puzzle hungry gamers something to sink hours and hours into. Its mystery and beauty instantly captured my attention and its puzzles left me bamboozled to say the least.

After a minimalist loading screen and title, I found myself in a long tunnel with basic first-person controls to navigate. Emerging from the tunnel, into the light, the beauty of the world created by Blow was instantly striking. Hyper-saturated colours permeate everything and made the island feel very inviting, but lonely. I felt like I had arrived after the fact, after the ‘activity’ which had laid the cables and installed the puzzle screens that are at the core of the game. Clever visual cues led me into a run-down castle’s courtyard and to the first set of screens. On the screen was a simple line puzzle, with a predetermined start and finish point. Drawing the line or ‘snake’ in the correct pattern powered up the next screen, then the next and the next. Each step got me closer to finally powering up the castle’s door and letting me out onto the mysterious island proper. 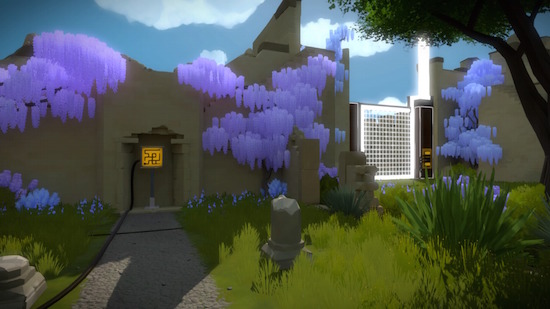 All over the island are doors and contraptions connected to screens. Each screen has a core mechanic, but is slightly harder, or with a slightly different mechanic to work-out. The next screen follows the same process, but harder again and so one and so on……..that’s the game. That is – “Like before, but a bit harder and a bit different”. In no way am I being dismissive either. We all know the rules for cross-words and the like, but The Witness has its own puzzle ‘language’. It’s a true credit to Blow and his development team, creating a whole game around very unique, complex puzzles. Then, actually teaching the player from scratch the mechanics and rules around the problems they have created. Johnathan Blow is undoubtedly one of the smartest game developers in the world.

This step by step teaching is at the core of Blows game and has an air of Metroid-Vania to it. By this I mean, I could only proceed to the next area or power up the next device, once I had the tools. And I don’t mean the right weapon or keys. I mean once I had the knowledge of how the puzzle works. As an aside, this progression puts a spanner in the works if I was to use a FAQ or YouTube vid, because if I didn’t learn the reason why the puzzle is solved in a particular way. I have missed out what Blow was trying to teach me. Using the internet to help, means I don’t gain the ‘knowledge’ to help on the next puzzles solution. And there is a lot of knowledge to gather, with a rumoured 700+ puzzles on the island!

I loved Braid and appreciate Jonathan Blow’s continued attention to detail, subtly and uncompromising perspective on making me solve each problem with no hints or clues. The Witness is really a digital version of a book of Suduko or Cross Word puzzles. But, to be honest, without a clear narrative driving me on, I got bored. The world certainly hints to a mystery and during the hours I played, gave almost nothing away as to what the mystery pertains too. I eventually could not find a reason to struggle through a brain twister, just to get to the next one.

Doing puzzle after puzzle for no reason apart from just doing puzzles, is not my idea of fun. That said, I cannot deny that The Witness is a beautifully crafted experience with more brains in its little pinky than most other video games. So, if you love problem solving and want to push your grey matter, The Witness was made for you.