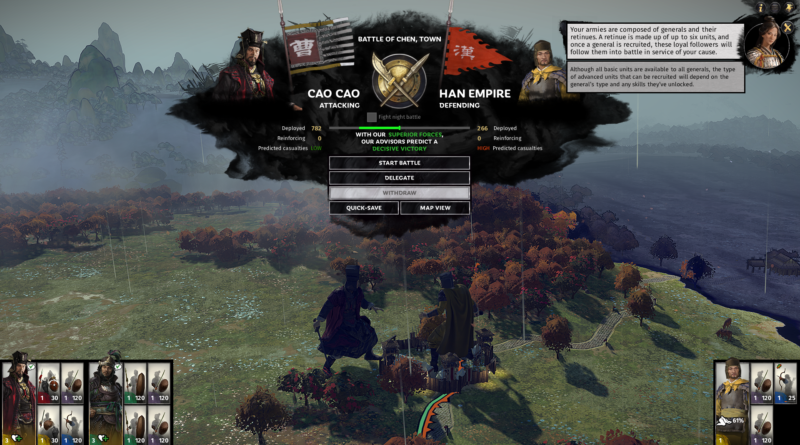 Dear readers, before I start this review, I want to apologise. Apologise for how late this write-up is.

I really wanted to get my thoughts on Total War Three Kings posted sooner than I have but I blame Asobo Studio’s [simply amazing] A Plague Tale: Innocence, a game I bought a few days after a download code for Total War Three Kings landed in my inbox. “I’ll look at it for a few hours then get stuck into TW,” I said. “It’ll be all sweet,” I said.

Well, best laid plans of mice & men and all that …

There’s a Chinese proverb that goes something like this: “One moment of patience may ward off a great disaster; one moment of impatience may ruin a whole life” and it’s one that aptly applies to Total War Three Kings. Patience is king in this turn-based, real-time strategy game where sure and steady wins the race.

Set during the fall of the Han Dynasty – China’s second imperial dynasty that was succeeded by the Three Kingdoms period – has two play styes or different campaigns, I guess, each based on the tactics from historial Chinese texts, Romances of the Three Kingdoms and Records of the Three Kingdoms which – long story, short – deal with the plots, personal and military battles, intrigues, and struggles of the states Shu Han, Eastern Wu and Cao Wei. 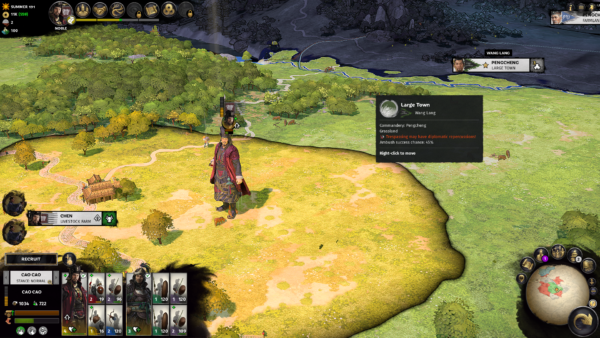 Now, I’ll admit right off the bat: It’s been a fair few years between drinks since I last played a Total War game. In fact, I think the last one I played was Total War Rome, which came out in … quickly checks Google …cripes, in 2004 so it’s fair to say I was a bit rusty when it came to the intricacies of the Creative Assembly’s real-time, turn-based strategy series. Time with the tutorial was in order, I decided. Lessons out of the way and it was into battle, deciding to open with Cao Cao, a warlord who rose to great prominence in the final years of the Han Dynasty.

I had a decisive victory against a rival army, with the enemy troops retreating when their losses became too great. When you defeat a rival army, you’ll often capture key soldiers, which you can then either employ, execute or release. More often than not, there are huge benefits to adding them to your army.

As well as straight out assault, when you attack enemy villages you have the option of demanding surrender or starving out the villagers, in the hope the will surrender. When you claim a village, you can either sack it or occupy it, which will open up trade opportunities with neighbouring provinces, which increases your power. You can also bring in reforms to villages/towns you have captures which means things like issuing envoys, creating a currency-based economy and conscripting villages to join your army. Reforms are turned based.

The ability to pause a battle at almost any point means you can sit back, ponder what to do, work out risk versus reward, then get back into things. It also means you can go grab a cup of [insert preferred hot drink here] and a couple of slices of [insert preferred toasted item here] mid-battle. Remember, generals need sustenance, too, so don’t battle on an empty stomach! 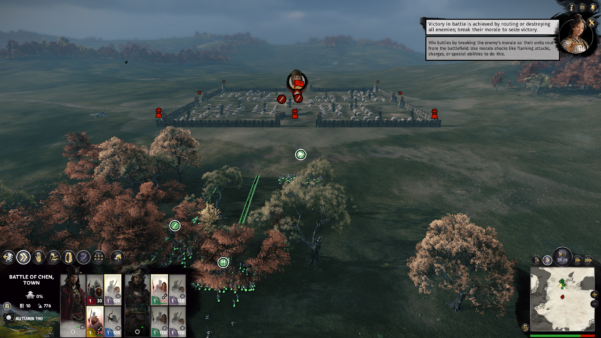 For those players not wise in the ways of Total War –  and newcomers to the series in general – you will almost be overwhelmed by Three Kings so I really, really recommend you work your way through the tutorial, which gives you the tips and tricks to start getting to grips with things. No-one can accuse developer Creative Assembly of creating an arcade-like experience with Three Kings, or any Total War game, and like its predecessors, Three Kings is deep, it’s thought provoking and it’s brutally hard if you don’t pay attention to what’s happening on the battle field.

Visually, Three Kingdoms is a looker but I reckon you’ll need a hefty PC to run things at maximum. It has a nice, almost water colour visual style about it, and my PC (i5 8400 CPU paired with 8Gb of memory and a AMD RX580 GPU) was able to handle things pretty well at the high preset. Load times, though, are long, especially at the start of a battle. I was loading from a mechanical drive, mind you, so times are undoubtably quicker from a solid state drive but I did think load times between battles were on the lengthy side.

OK, so what’s the final conclusion? For fans of real-time strategies, Three Kingdoms is another fine addition from the Creative Assembly stable and is again proof that Creative Assembly is the master at historical turn-based, real-time strategy games with campaigns that are some of the best – if not the best – in the category. Fans of the series and the genre will find plenty to love and adore here, mark my words.