I’ve been back in the world of The Witcher for about a month now and to honest, I’m not sure I want to come back home. After a fantastic outing previous gen we pick up the legend of Geralt the White Wolf and legend absolutely is the right word,

The Wild Hunt is a massive game, CD Projekt Red have delivered a living and breathing medieval world and from the first few steps the game paints a rich tapestry all around you. A tapestry that begs to be explored, most open world games can become repetitive quickly and soon lose their shine, but The Wild Hunt offers variety and side quests full of depth. I’ll come clean, I’m nowhere near as far into the story as my contemporaries, because there’s always something interesting over the horizon, a mysterious windmill, a stranded deserter, a creepy monster cave, the wildlife and Gwent. 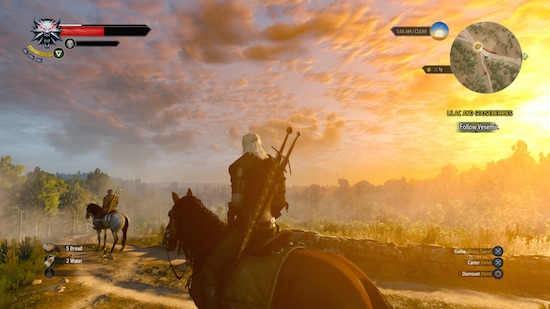 Gwent. Hmmm, a virtual card game in a virtual world where all sorts non-player characters like to play. The rules aren’t immediately obvious, but the once the game clicks it can become an obsession. Never mind chasing down a Manticore, there’s a game of Gwent going at the pub. You can win some coin, but winning special cards for your deck is more the point. It’s a strategic game of chance and skill and once learnt, is not forgotten. 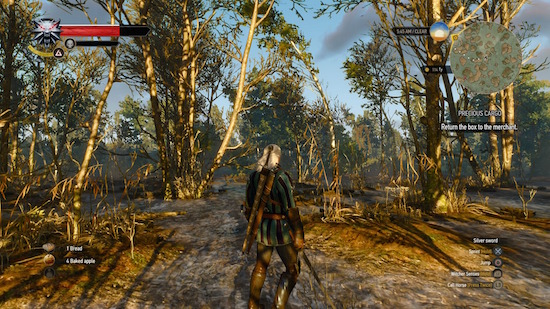 Graphically the game is simply stunning, I’ve said it’s living and breathing already, but the as landscape rolls around you there are so many opportunities to stop and smell the flowers (literally). The map is simply enormous and always feels fresh, there’s never that niggling feeling of deja vue when you see the same tree again like you get in other games. The variety of towns and settlements are a joy and wandering the streets listening to the chatter of passers by is always amusing. The world has an economy holding it up and the NPC’s do a great job of convincing you they actually have lives to go about. Trying to wax lyrical about the depth that the developers have squeezed into this game is pointless, just accept it’s a damn good medieval life simulator and get on with exploring it. 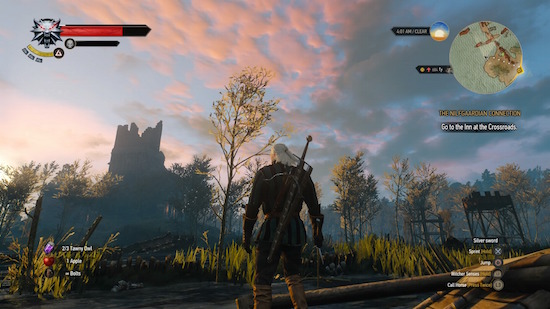 The elements also play a huge part in the atmosphere with the game’s dynamic weather system playing its hand regularly, sunbeams stream through the canopy of a thick forest in the morning and then get yourself stuck in a hurricane of a storm in the afternoon. Geralt will often point out noticeable events such as the change in the weather, it’s a lovely touch, then of course there are the water effects. Rippling lakes and splashy mountain streams, the physics around the water is top notch, so is the art. There is so much crammed into this title to give the player an absolute sense of disbelief it is often overwhelming, a thousand word review can’t do the complexity of the environment justice.

Getting around the gigantic map is handled well, there are signposts acting as quick travel spots as long as you have visited them previously. There is also Roach, the powerhouse of a horse that is always only a click of your stick away. As long as he does’t get stuck in a paddock or on the other side of a river first. Once Roach is back under control and your Gerald is galloping along the scenery will simply rush by. A really nice touch is to allow Roach to carry you at pace along marked paths, all by holding down one button, making the trip enjoyable and a terrific opportunity to drink in the scenery. Combat is also vastly improved over Witcher 2, it still feels a little loose at first when surrounded by a pack of wolves, but a few levels in and a decent scrap never feels too overwhelming. 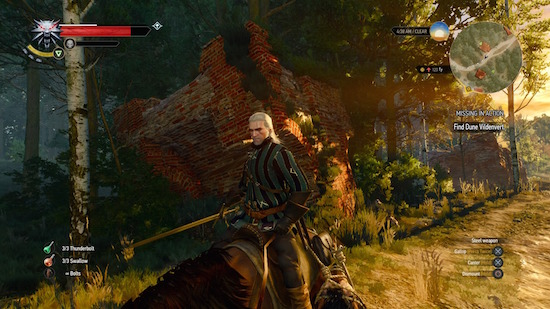 As you travel Gerald discovers various mysteries and side quests from noticeboards in the settlements. These options often culminate in a monster hunt, setting out to investigate and  fight off a mythical beast that’s been a bit naughty. Monster hunts are exhilarating and can often run for a while as you track a wounded beast. These quests are handled well, grabbing snippets of information, using Gerald’s homegrown version of Detective Mode.  Where a pull of the left trigger reveals a view of the world highlighted to the tune of whatever quest is active and of course any you can interact with (loot), this is also very helpful when wandering around as a fast view of Gerald’s advanced senses picking up traces of his target. Some quests also offer up a selection of dialogue choices letting Gerald offer CSI type advice to the player as he wrangles clues, it’s all good, mostly clean and sometimes adult fun. 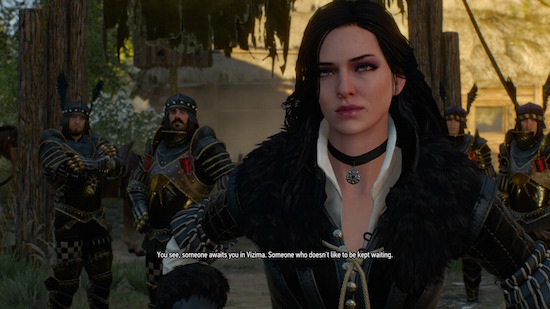 I’m not going to even make a weak attempt at dressing up the narrative or understanding the politics of the game world. Needless to say Gerald is tracking down his old girlfriends and a protege, which all ends up in plenty of magickery and mayhem.

As far as character development goes, there are a wealth of options and once a few levels have been stored up switching out key components called Mutagens can let you customise your character build pretty much on the fly. Crafting makes a big return and being able to concoct potions or oils to enhance you and your weapons is key to success. That said the inventory system can be a touch overwhelming at first glance and even after a couple of hours being an RPG Kleptomaniac can offer up a rucksack full of stuff you don’t know what to with. 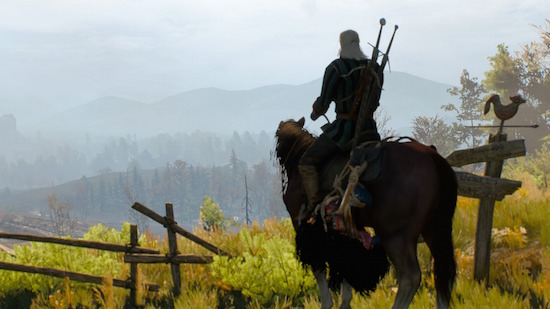 In conclusion, The Wild Hunt is a game worth getting excited for. The world it has on offer takes some beating, there’s a nice big quest to sink your teeth into, but there’s so much more to trawl over instead. Gwent offers the obsessional gamer something to play in between Hearthstone matches. The absolute quality of the game and all it offers cannot be understated, hats off to the team at CD Project Red – especially given they are supporting the game with masses of regular free DLC.

When a PR company tells you to take your time you know it must be special, and they were right. Better than life? Maybe not, but damn close second.